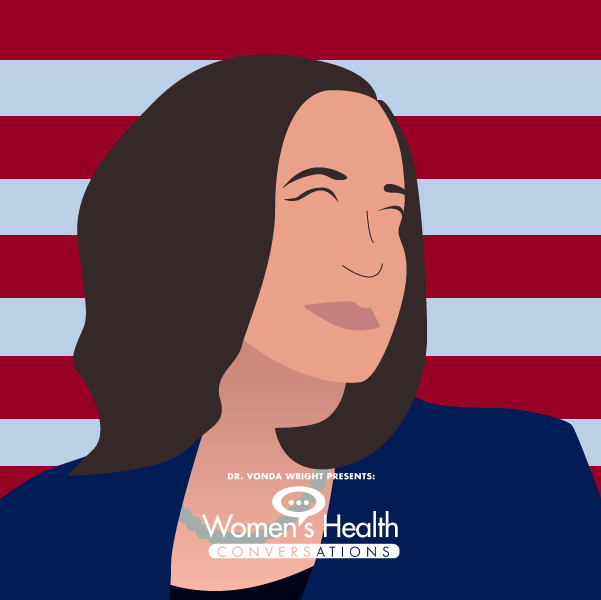 If you haven’t noticed – Kamala Harris has just made history, inspiring women leaders everywhere. Regardless of your political affiliations, Vice President-Elect Kamala Harris symbolizes something much bigger than herself – intentional empowerment for women and minorities. Electing a woman of color to the second-highest position of authority in the United States will undoubtedly send out a shock wave that shatters the glass ceiling for women all over the world.

Why Female Leadership Matters to Everyone

We created Women’s Health Conversations because we saw that women were the ones making the majority of healthcare decisions in the US, yet we were not seen for our transformative power within the industry. We wanted to empower women to take their health into their own hands. Similarly, since our country’s foundation, men have held positions of power in the USA for hundreds of years – and that paradigm is not working in today’s America where women and minorities are demanding more representation. Kamala Harris has the opportunity to represent, empower, and lead a nation of ambitious women and bring our stories to the table.

The argument for more inspiring women leaders comes from a place of principle and of results; It’s not just a theory or a feel-good movement, women in leadership works. A 2015 report conducted by McKinsey found that “… for every 10% increase in gender diversity, earnings before interest and taxes rose by 3.5%” If finance is the main determinant for who gets to sit in the C suite and top leadership positions – there you have it.

Despite this, only ~5% of CEOs are women. We won’t get into all the reasons why there aren’t more women in leadership positions because it is a story that many of us are already familiar with. What we are excited about sharing is that female leadership is becoming more of a norm and a standard via trailblazing and inspiring women in leadership.

Kamala may be rocking the political scene, but there are plenty of women shaking up different industries around the world such as:

How Kamala can Help Women Everywhere to Succeed

Never before has a woman held such a high position in the American political system. All eyes will be on Kamala as the first Black and South Asian female VP. Being in such an influential and visible position also has its benefits for women everywhere.

The saying “empowered women empower women” has science to back it up as well. One particular study evaluated women’s confidence and reactions to a speech given by a female vs a male leader. At the end of the study, researchers concluded that highly successful female leaders inspired women to speak more and improved their own self-evaluations in stressful leadership tasks. Seeing inspiring women in leadership positions, whether overtly or subconsciously, has a powerful influence over our own confidence. It may even help other women to achieve leadership positions within the same organization and externally, as one study points out. The power of seeing someone like you, seeing another woman who has shared the same experiences as you and is thriving, is undeniable. In fact, many of the women who ran for political seats in 2018 said they were inspired to do so by Hillary Clinton.

Moreover, Kamala represents the resiliency and ambition of minorities in our country. Despite an especially challenging year or rather 244 years for people of color in our country, Kamala represents that they can still overcome and exercise their resiliency even in our political system. Most importantly, minority representation in leadership positions (and especially politics) benefits minorities, but it’s also better for everyone involved. A 2018 study by McKinsey found that companies with the lowest amount of diversity in race, gender, and ethnicity were 29% less likely to achieve above-average profitability.

Racial and ethnic diversity brings diversity not just in physical attributes, but in culture, perspective, and problem-solving to avoid groupthink. It means higher retention and empowerment for other minorities within the organization; The frequency of elected minority political leaders is likely to increase due to Kamala’s election. Kamala Harris’ election displays that diversity is a necessity and a priority, not an afterthought.

Kamala’s leadership is a testament to what our young girls can do, and we can expect the glass ceiling to remain shattered for generations to come. Young converse-clad girls are seeing themselves represented in the most prestigious leadership positions in the country – not just as a woman, but as a Black and South Asian woman who once stood in their shoes and has now forged a path for them to succeed as she has.

Kamala told one young biracial girl named Jasmeen who wondered if she could one day become president: “We are all born as leaders, and it’s just a matter of when you decide to activate that. … Leading up to you being president, understand every day of your life you have an opportunity to lead. Today, tomorrow, every day of your life.”

Inspiring women in leadership positions demonstrate that young girls, careered women, and women of color can achieve the same. Our hope and sincere (evidence backed) belief is that her nomination will inspire more intentional changes that lead to the empowerment of women and people of color in every organization and country.