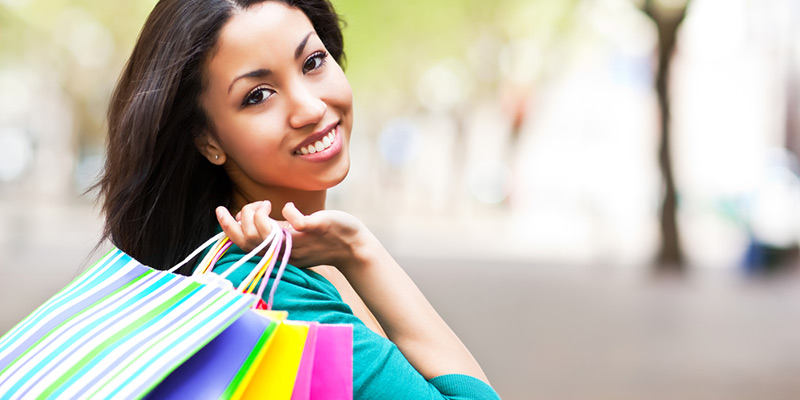 Moms, wives, grandmothers, aunts, daughters, sisters–we’re all guilty. Guilty of spending so much time and energy on our loved ones that we sometimes (read: a lot of the time) forget about taking care of ourselves or even rewarding ourselves for a job well done.

Many, sometimes most, of your day-to-day activities revolve around the needs of others in your life, and you’re not complaining. But remember that if your own needs and wants aren’t also met, you won’t be able to remain the sturdy foundation for everyone else. And what better time to do something nice for yourself than the holiday season?

In fact, there’s even science behind this idea of treating yourself so that you can feel happier and therefore present your best self to the world.

Go Ahead, Be a Little Selfish

How many times have you gotten advice to simply “do what makes you happy”? Easier said than done, right? If you’re like most women, you’re probably very reluctant to choose to buy or do something for yourself if that time, energy, or money could be spent on someone else. But a study published in Psychological Science came to a surprising conclusion about the link between self-interest and happiness.

As it turns out, most people don’t gain as much happiness as would be expected from choosing to do something based purely on satisfying their self-interests. The reason for this seems to be tied to the guilt we as humans and especially women tend to feel when we perceive our actions to be “selfish” instead of “selfless.” But researchers from the University of Pennsylvania found that when the choice between being selfish and selfless is taken away, the majority of people experienced greater happiness when being, at least a little bit, “selfish”.

It goes like this: participants in the study were given three dollars. Some people were given the choice to either give that money to a specific charity or to spend it on themselves. Others weren’t given a choice. Of this “no choice” group, some were told to give the money to a charity, while others were instructed to buy something for themselves.

Interestingly enough, the group with the highest reported happiness and satisfaction was the group that was told to spend the money on themselves. Researchers concluded that by taking away the moral dilemma of choosing between being nice to yourself or to someone else, people are much more able to enjoy investing in their own happiness. This is because the perceived negative idea of being selfish is taken off their shoulders.

So what’s the takeaway from this study and others like it? Truly, there’s nothing wrong with paying a little attention to yourself and treating number-one every once in awhile. Don’t think of being nice to yourself as being selfish. Instead, think of it as a necessary step toward happiness, healthfulness, and fulfillment.

Get that facial or manicure, or even buy yourself something nice as a reminder that you’re important, too. For a beautiful piece of jewelry that supports women, check out Ori Jewels, a woman-owned American importer of gorgeous jewelry designed for women, by women.

Each piece is 100 percent designed and handmade by Israeli women, who draw their artistic inspiration from their vibrant middle eastern culture, meditation practices, and other breathtaking aspects of eastern philosophy.

Whether you want something small and simple, like a meditation ring from the Ori Nadia Collection, or a statement piece from the Ori Rina Collection, perfect for holiday parties and festivities, Ori Jewels has something for all women of all ages. And not only are you doing something nice for yourself, but you’re also helping to support the women-centered mission of Ori Jewels to help connect and empower women from all around the world.

So go ahead, indulge in something luxurious for yourself and watch yourself and your loved ones light up this holiday season!