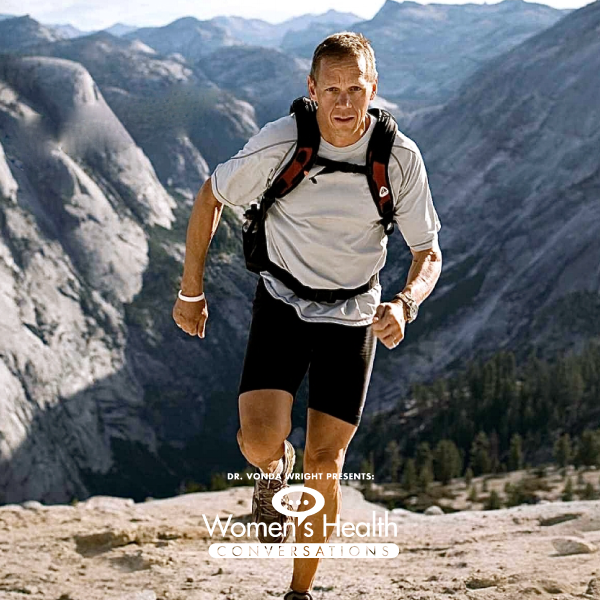 “I try not to take myself too seriously despite the fact that I undoubtedly take on serious challenges. I love adventure and I am fueled by testing myself to do things that push the far reaches of my ability, both physically and mentally…. I’m an addict who runs and a runner who writes.”

Ultra-marathoner Charlie Engel came onto the Smart Savvy Speaker Series to talk with Dr.Wright about running for recovery and inspiring positive change.

Charlie has taken part in many ‘challenge running’ events which raise money for good causes. He has run, and often won, events in the Gobi desert, the Amazon Jungle, Chile, and Vietnam, and in 2007 he completed his record-breaking run across the 4300 miles of Sahara Desert.

“I remember running in the Amazon and some guy just blurted out that someone should run across the Sahara and I immediately thought that it was just insane and ridiculous. But it stuck, and I took possession of the idea: to do a first in adventure sports. It’s true [that] a word in passing from a stranger can influence your life.”

During this incredible undertaking, in which Charlie and his team ran approximately 2 marathons a day for 111 days consecutively, Charlie had a moment of revelation regarding the importance of struggle and his approach to it:

“I was thinking about the end 4000 miles down the road rather than being present in the moment, and it was exhausting. It was 140-degree ground temp and two of the guys were on IV drips after just one week. I changed to the ‘one day at a time’ approach and basically meditated while I ran, focussing on my breathing and being present in that moment. It changed everything.”

“How is it physically possible to run so much?”

“It isn’t physically possible, it is only mentally possible. The mind has to will the body. The body can’t will the mind.”

Charlie believes that struggle is the key to life and beating addiction, and he knows that running will guarantee struggle.

Charlie used his contacts from his ‘ExtremeMakeover Home edition’ production work to get award-winning director James Moll and Hollywood actor Matt Damon behind the idea.  The documentary “Running the Sahara” was the result. Charlie also wrote a book about the experience and his battle with  addiction in “Running Man.”

While filming Charlie’s Sahara run, Matt Damon got inspired by all he saw in Africa and decided to set up non-profit charity water.org. This is now the largest non-profit organization in the world.

Charlie says that the act of being of service was also a key ingredient in his recovery. He recalls that before his first meeting, his mentor told him to make the coffee. When fifty or so other people arrived, he realized that he had directly helped them by making sure there was coffee for them to sip during the meeting. He made a ritual out of doing this from that point forward.

Charlie’s dedication to service and recovery can also be seen in his involvement with the H2O Africa Foundation and water.org, organizations which aim to provide clean drinking water and sanitation to areas currently without, improving the lives of African communities.

“Helping others is a great way out of being afraid. We all need to be more loving and more generous.”

Charlie says that even if you don’t love exercise, doing it regularly will lead to improved brain health along with physical strength, agility, flexibility, endurance, and cardiovascular health.  It will also contribute to a healthier lifestyle. However, he warns against setting distance-related goals, focusing on time-related ones, paying close attention to rest, and physical recovery time.

“Don’t overtrain. Make a commitment to time: thirty minutes a day. And then slowly up the time limit. You have to hydrate and sleep well to allow your body to recover, too.”

Charlie also recommends Hot Yoga and Hiking as good supplemental activities to counterbalance the effects of running and to enhance mental and physical well-being. “You don’t need any particular skills to go hiking. You can go at your own pace and you will be out in nature, breathing clean air —-this is so good for your body and soul.”

Charlie now has his sights set on Everest. In his 5.8 Global Adventure Series, Charlie plans to unite the lowest point on Earth (the Dead Sea) with the highest in order to symbolically demonstrate the ‘rollercoaster of life’.

“I’m going to take a container of Dead Sea water and put it on the summit of Everest 4,500 miles away. I’ve called it 5.8 because that is the vertical distance in miles between the two. I find it fascinating and perspective-altering that we all live in that little slither of space.”

We all agree and wish him the best of luck in this awe-inspiring endeavor.

Charlie Engle is a global ultra-endurance athlete and the founder of the 5.8 Global Adventure Series, one of the most ambitious expeditions in modern history, trekking from the lowest to the highest points on all seven continents. He is also one of the most accomplished ultramarathon runners in the world, having placed in hundreds of races in dozens of countries. His incredible athletic ability was profiled in the film, Running the Sahara, narrated by Matt Damon. The documentary highlighted his historic, record-setting journey across the world’s largest desert, running more than two marathons a day for 111 consecutive days, for a total of 4,500 miles. Charlie’s transcontinental run through deep sand and politically unstable countries remains one of the premier accomplishments in the ultra-endurance and adventure sports worlds. After crossing the Sahara and seeing the global water crisis first-hand, Charlie teamed up with Matt Damon to create H20 Africa, which later became the global humanitarian organization, Water.org. Charlie’s memoir, Running Man, became a bestseller shortly aSer it was published in 2016. While the book details his inspiring life story, it is about more than just running. It is about facing demons, overcoming impossible odds, keeping your sense of humor, and discovering the redemptive power of putting one foot in front of the other, even when you feel like you can’t keep going. His motivation to run and tackle extreme adventures stems from his battle with addiction to drugs and alcohol.

Charlie has been in recovery since July 23, 1992, and he credits a large part of his recovery to the purposeful devotion and emotional release he experienced while running.

Charlie is a dynamic speaker who has enthralled audiences around the world, from keynotes at the Boston Marathon and Google to the National Geographic Society, NATO, the United Nations, and the deck of a nuclear-class U.S. Naval aircraft carrier.

He’s been featured in the New York Times, National Geographic Weekend, Outside, Runner’s World, NPR’s All Things Considered, Men’s Journal, and The Tonight Show with Jay Leno. He lives with his wife, Astacianna Hatcher, in Durham, North Carolina.